Board Game Diary: Pumpkin Spice and Everything a Fright 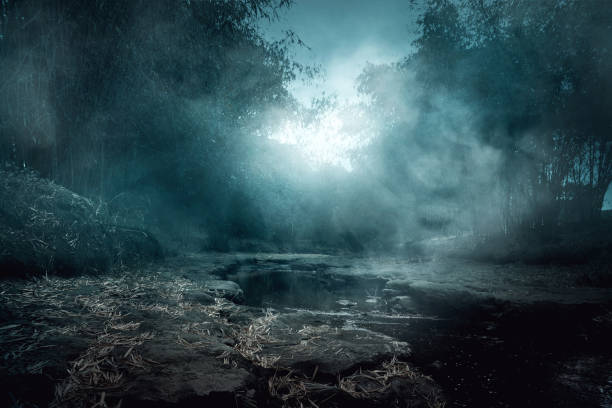 I love October. I wouldn’t even hesitate to call myself basic: cider, donuts, warm sweaters, and pumpkin-spiced anything. It’s all a big part of what makes fall one of my favorite seasons. It also doesn’t hurt that October contains one of my favorite holidays which is Halloween but not for the reasons you may think. Dressing up for the holiday has never been something I looked forward to but I have looked forward to the movies. I could, without any financial demands, sit in for a month-long horror movie marathon filled with all the monsters, slashers, ghosts, and ghouls one could handle.

This love of everything horror poured into my love of tabletop gaming once I entered into the hobby. I scoured every retail source I could in search of that spine-tingling frightful experience. To my surprise, the theme of horror isn’t lost among the hobby tabletop gaming market as many spooktacular titles emerge in droves every fall season. I dove headfirst into all the creepy goodness that is horror-themed games and found that a spooky theme doesn’t always translate into a spooky game. Rather, it is seemingly difficult to find a tabletop game experience that matches the thrill of watching one of your bed-wetting classics. All the favored thrilling experiences you crave from watching a horror film seem vacant: hastened breaths, skipped heartbeats, and several moments of sheer panic. You might be asking yourself exactly how an analog game can accomplish this task. An excellent question that I feel deserves a deeper look.

These feelings of dread are complicated and arduous to replicate artificially. Each of our fear responses triggers differently based on our life experiences and many of us lack the ability to easily suspend our disbelief. It is the job of the filmmaker to bypass any of these safeguards and trigger a very real fear response. How does this apply to tabletop games though?

Tabletop games are separated into three different categories: Board games, card games, and tabletop role-playing games. Each of which I’ll tackle separately as I feel each come with their own strengths and weaknesses in regards to this topic. Let’s begin with board games.

There is no shortage of board games with a horror theme applied to them. Some of the most popular games include Arkham Horror, Eldritch Horror, Mansions of Madness, Dead of Winter, and Betrayal at House on the Hill. Mechanics in each game are wildly diverse across each one but they all carry their own version of a spooky aesthetic. As previously stated, horror-themed media tends to use imagery, sound, storytelling, and live-action to elicit a fear response. Board games often are not afforded the luxury of sound and live-action so they must rely solely on its imagery and storytelling. This asks more of the players as they must use their imagination without the extra visual and auditory representation. This could be demonstrated as a weakness on the part of board games to replicate a fear response through a point that could be made for strength.

Players will be put into grotesque or scary situations and then will be asked to participate. This has the potential of involving a player more than simply watching a movie or television show would. Obviously, this is at the mercy of the player’s imagination but one could argue this to be scarier as it’s harder to disassociate.

Though most titles of board games simply apply horror-themed narratives and artwork atop of mechanics, some games have been rather innovative in their designs to incorporate a feeling of dread. A classic example of this is the games Nightmare and Atmosfear (Yes, spelled like that). These games, mechanically and visually, are very dated; Awful at times even. They do, however, carry a very unique mechanic of incorporating a VHS tape. The game timer is the length of the tapes playtime. Most of the time, the VHS tape will simply show an ever-changing game clock that counts down to the game’s deadline but you will be interrupted at times. The narrator will abruptly appear and scream at you to do something or ask a question resulting in a player’s benefit or punishment. Gimmicky? Yes, but effective nonetheless at eliciting involuntary urination.

Card games are a completely different beast unto themselves. I’m specifically writing about Collectible Card Games (CCGs) as they tend to differ quite a bit in terms of theme. Typically, they roll with a certain theme and all cards pertain to that theme. Games like Magic: The Gathering, Pokemon, Yu-Gi-Oh!, and Keyforge all fall into their themes quite often and diverge fall less. My familiarity with these games is limited but I think I have a handle on their general gameplay to make a point. In my experience with CCGs, players are hyper-focused on the mechanics of the game itself with an assortment of card effects, abilities, and triggers. It becomes increasingly difficult to focus on anything but this unless you’re being willfully dull. I cannot think of a way to engage players inside of a horror theme rather than the mechanics within this style of game.

Living Card Games is a different story though. Living Card Games (LCGs) was a term coined by Fantasy Flight Games that differs from CCGs as they do not follow the same sales model. They have everything you will need to play within one box so there is no need to buy multiple booster packs – it is all self-contained. This lends itself to a more thematic approach to the card game genre without the need to find new thematic material for new sets. Arkham Horror: The Card Game is a great example of this with the Lovecraftian stage it has set.

I have not played this style of game so I’m merely adding conjecture, but I feel even LCGs carry the same burden of their counterpart, CCGs. They are so wrapped up within their own mechanics, card play and interactions, that theme can become lost. Intensions are clear but without a strong directional mechanic focused on the intent of horror, the feelings of spookiness are soon to dissipate.

When somebody brings up narrative theme and gaming, my mind tends to drift toward thoughts of a certain type of gaming. The type of gaming that only bounds are those set by the player’s imagination. My mind is on the vast world of Tabletop Role-playing Games.

These games are the royalty of dynamic themes. They can be anywhere and do almost anything. This is where the potential for a horror-themed narrative can truly flourish. Like a good book, the narrative directed by the game master, or storyteller in this analogy, which can take horrifying turns. They build the story arch to build tension, fear, and anxiety which culminates into the desired ending.

A strength I see here that is limited within certain types of media like movies or shows is control. Video media, like movies and TV shows, rely on well-crafted characters that are relatable so viewers can displace themselves into these characters. In essences, becoming part of the story which, within our context, brings the viewer to the first-person perspective to all the horror-filled goodness.

Tabletop Role-Playing Games don’t require such trickery as they literally place their players into the scene. A world they can build through the choices that they make – Free to head straight into the lair of the masked serial killer or hide from the tentacled terror thrashing turbulently.

All of the discussed have some commonality with their form of terror they can illicit. Often, fear triggers when one’s safety is in doubt. This doubt can be elaborated further into a loss of control. All of the aforementioned styles of games try to mimic this in various ways. Whether it is a deck of randomly shuffled cards with dreadful outcomes or another player lurking in secret, these all contain an element of control that is lost by the players at the table. This unknown factor is always at odds with our safety hence our fear reaction seems to pertain.

Video media has an advantage that we have alluded to earlier. The classic jump scare or the rapidly building anxiety over an impending scare is all too familiar feeling when watching a horror film or TV show. They are both able to exploit an element yet to be successfully introduced into gaming which is visuals. Images can have a powerful effect on one’s psyche. They can really bring the element of the unknown and loss of control to life with terrifying and instantaneous images.

For those of us with a visual sense, this becomes our primary source of information reception. We subconsciously program our brain to rely on these senses as a preference due to its apparent ease. Our brain attaches records that become memories with these senses, and since the visual sense muscles are the strongest, the brain prefers storing memories with visual stimulation. We also can attach further sense to these memories to strengthen them. Eerie music and sound editing is a crucial element is solidifying these terrifying reactions and memories.

Analog games, as mentioned above, have a difficult time recreating these feelings. The combination of live-action visuals and audio that video media relies on is an element lost upon these tabletop games. They rely instead on the imaginations of their players to recreate these feelings of dread by means of artwork, settings, and game mechanics that simulate the unknown.

Is this something tabletop games can solve? I’m overly optimistic on this front with technology entering into the world of tabletop. Board games like Mansions of Madness: Second Edition has app-driven gameplay that runs the maintenance of the play space. Often while playing, disturbing sounds and music will start playing from your tablet creating an ambiance of general fear. The app also triggers events that players need to deal with that mimics a feeling of uncertainty among the players. This technology, if taken a bit further, would be an excellent opportunity to incorporate some elements of auditory and visual scares.

Another innovative title that may have solved the tabletop game horror issue is Nyctophobia: The Hunted. In Nyctophobia, one player takes on the role of the killer and the others are the survivors looking for their lost friend in the woods at night. The unique aspect of this game is that all players, minus the killer player, will be blindfolded while they play. They will have to navigate the landscape of the forest board merely through touch – literally feeling their way through the dark forest. If this sounds unnerving then you are not alone. This sets some potential players completely off and will refuse to play. In essence, a “fight or flight” reaction. Though this does not address all the issues of horror themes and tabletop games, it does pose an interesting mechanical solution for designers to trigger those core fears of the unknown.

Fear is a fickle beast to recreate in an artificial setting. We live in a world of digital entertainment that feeds us a glut of gore every October that it becomes rather boring at times. Almost inoculated to the whole experience of fear thereby passing horror into the realm of comedy at times. It is that kind of mindset that makes the job of tabletop games difficult when they try their hand at the genre. A task that has shown, with many titles, to fall short of the task of truly frightening us. Will the implementation of digital devices into tabletop gaming prove to be the adrenaline shot needed to boost games into a new stratosphere of fear? I’ll be patiently waiting here in the dark with my security blanket for the answer.